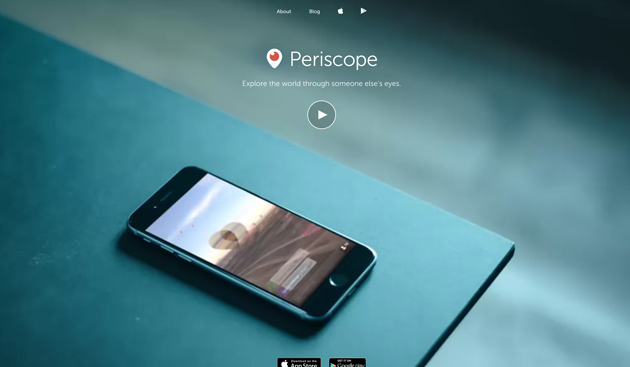 Originally released in March 2015, Periscope is a live-streaming video app that lets individuals watch live videos and easily share films with other users. Viewers are able to post comments underneath each film, and videos can accumulate hearts, which are equivalent to Facebook’s likes. Currently, the application’s users watch more than 350,000 hours of videos per day.

By August 2015, more than 10 million people had downloaded the application, and approximately two million users watch at least one video per day. According to one report, more than 120 million people will likely download the software during the next two years. Periscope is rapidly becoming a major player in the business world with a growing number of organizations using it as part of their online digital marketing strategy.

Numerous studies have shown that potential customers are more likely to read detailed reviews of a product than comprehensive studies that evaluate an item’s attributes. Companies may give customers discounts if they post live videos of products that they have recently purchased. For example, a business that sells helmets recently asked patrons to create videos of new products that feature durable cameras. After eight customers had used Periscope to share videos, the company’s sales increased by approximately 38 percent.

Various studies have indicated that potential buyers are more likely to visit a store if they know that many other customers have already patronized the business. When a company opens a new location, the entrepreneur can conduct a live tour for Periscope’s users. If customers are shopping in the store, the presence of patrons will encourage other individuals to also visit the shop.

According to one analysis, a new company that posts a film that describes its history will generally stay in business for a longer period of time than other companies in the same niche. An entrepreneur can provide a live video that analyzes the proprietor’s initial ideas, the process of creating new products, the company’s charitable activities and the owner’s personal accomplishments.

On June 15, 2015, the founder of an online news agency utilized Periscope to conduct a live interview. The organization’s CEO answered questions about events that have inspired him, his beliefs about his company’s niche and innovative services that the business may provide. Throughout the next three months, the number of people who regularly visit the company’s website increased by around 17 percent.

A recent study showed that a discount of 10 percent can augment the amount of customers who purchase a product by more than 35 percent. A business can provide promotional codes for potential buyers who use Periscope in order to watch the company’s videos, and some enterprises double the discounts if viewers share the clips with a certain number of friends.

On August 12, 2015, Periscope’s CEO conducted a live session that allowed users to ask questions, and the video was watched by around 3,000 people in real time. Subsequently, the film has been viewed by more than 28,000 individuals. Since the clip was posted, the founders of approximately 17 businesses have used the application to provide responses for frequently asked questions.

By utilizing the innovative app, an enterprise can provide videos with updates that are related to business deals, new products, changes in prices and the establishment of new locations in real time. CNN has begun to post live reports on Periscope, and the amount of users who watch these videos is rising rapidly. Moreover, the popular news agency created a video indicating that Periscope may eventually become the primary application for news agencies.

During the last three months, several sizable corporations have been posting videos with step-by-step instructions that teach patrons to use products and services. Due to Periscope’s connection with social media networks, viewers can instantaneously use Twitter to ask questions during the live video.

In April 2015, Red Bull used Periscope to let potential customers watch a live video from a party that was held at a well-known guest house, and the event lasted for three days and was mentioned by more than 3,000 users on various social media networks. After the video was posted, the number of people who inquired about the party that will be held in 2016 increased significantly. Furthermore, an analysis suggested that the live video substantially boosted the amount of individuals who posted updates about the event on Facebook and Twitter.

Adidas also utilized Periscope within one week of the app’s release, and during April 2015, the business provided a video that showed James Rodriguez and described his contract with the company. During the next two weeks, the number of people who created posts about Adidas on the social media networks increased by around 15 percent.

General Electric recently allowed Periscope’s users to watch a live interview that featured Bill Nye. According to multiple reviews, the live video substantially augmented the number of individuals who visited General Electric’s website during the interview, and the enterprise is planning to host several similar events before 2016.

Spotify has also conducted numerous interviews for Periscope’s users, and within one week of the app’s release, Spotify created an account and posted an exclusive interview with Conan O’Brien. Due to the newness of the company’s account, the live interview was initially watched by several hundred users, yet thousands of people have replayed the clip in the past six months.

When Periscope was first released, Mountain Dew created a live video that showcased the company’s apparel. Subsequently, the business sent free t-shirts to some of the video’s viewers, and more than 800 individuals created posts about the contest on other social media networks.

While posting videos that evaluate products, services or features, a company can encourage users to provide instantaneous feedback about each aspect of a product. Additionally, proprietors should view the live videos of individuals who strongly influence a niche and ask questions about the industry’s trends and new products.