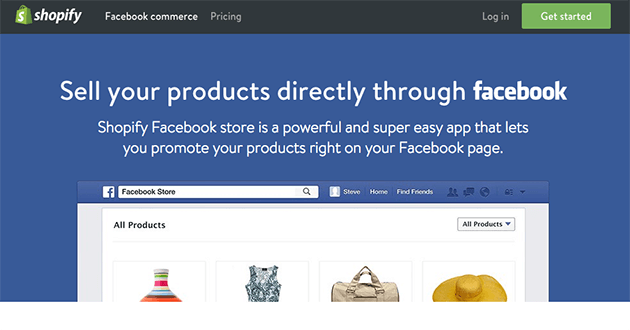 Wouldn’t it be nice if Facebook’s paid-advertisement traffic to your business page could lead more directly to sales?

Now it can. On September 16, 2015, Shopify announced their new partnership with Facebook to create a new “Shop” section on Facebook Pages that’s directly on your business page instead of in a separate tag or link to your external shop. These new Facebook storefronts are part of Facebook’s many new improvements to their business pages so that all companies can get more value out of paid social-media advertising.

By making sales right on Facebook, companies can sell more products faster — rather than just getting extra Internet traffic from Facebook, traffic which may or may not even lead to any sales on your external website. Essentially, your Facebook visitors can start “window-shopping” as soon as they reach your business page by scrolling down to the new “Shop” section to instantly see photos of your featured products. They can then browse through your selection and even buy directly from you without even having to leave Facebook.

Shopify explains that “Shopify merchants will be among the first to get the new Shop section on their Facebook Pages. We’ll be making this feature free and available to all Shopify merchants globally over the coming weeks. Consumers will be able to check out without leaving Facebook when purchasing from eligible merchants or go to their website to purchase.”

The further exciting point is that, as this quote suggests, other merchants are likely to follow suit if they see great results.

Are these new Facebook storefronts really what companies need?

As Copyblogger Media expert Sonia Simone described, Nicholas Carr’s term “digital sharecropping” still remains a big investment risk for all businesses using Facebook pages. She says, “What if you moved all of your marketing to a site like Facebook?

It’s local, it’s free to sign up, and it makes businesses feel like they’re doing something cutting-edge … but what happens when Facebook thinks you’ve done something that violates their terms of service and deletes your account? — Or changes the way you’re allowed to talk with your customers? Facebook is a particularly fast-changing platform.”

She goes on to add that it’s more important for businesses to develop online assets that they can actually control. All these new improvements on Facebook pages may significantly boost sales for some, but ultimately, they also give Facebook more power to do things like eventually adding small fees in other ways. Besides, if one day Facebook becomes less popular due to another social-media website, your Facebook storefront is useless … and you’ll still need a well-developed, separate website or application to sell your wares.

What should you do if you sell services instead of products on Facebook?

Shopify is an ideal candidate for new Facebook storefronts because their sellers all offer concrete products that you can sell easily through a single
photo. Since Facebook is a visually based website, anything you sell in a Facebook storefront isn’t appealing or presentable without a perfect photo
illustrating your product.

If you’re selling services rather than products, you’ll have many difficulties trying to illustrate your service in the descriptive way necessary to make a sale within just a single photo. Well-written text is a vital bridge connecting you to customers, but photos alone with very minimal text are generally a cold and impersonal way to sell your offerings that’s not likely to create many long-term customers.

Should you only include Facebook as part of a diversified marketing strategy?

Here’s what Shopify guru Sarah Ewart said in a private interview about the mobile-friendly features of Facebook compared to Shopify:

“The combination of both is the best bet because you can market your personal Shopify website in ways that you can’t market your Facebook page … but
Facebook is definitely great for mobile as most people visit Facebook on their mobile devices.”

Sarah also explained more of the little technicalities that will make a big impact on Facebook storefront users. First of all, you must now have a Shopify
store to get a new Facebook storefront. One added benefit of having a Shopify store in addition to your Facebook shop section is that all of Shopify’s
themes are mobile-friendly, so your website will display nicely across all mobile devices.

In terms of finances, the current rate of sales tax applied to all Shopify merchants will also apply to any sales that you make through this Facebook-page integration because Facebook storefronts will attach to your existing Shopify-checkout features. That means you’ll actually receive payments through Shopify, not Facebook, in the same way as if someone bought from you on your Shopify website.

Could the new Facebook shop section help Google favor you?

On April 21, 2015, Google released a new search-algorithm update favoring mobile-friendly pages. Facebook and its new shop section are well-optimized for
mobile devices; plus, most of Facebook’s visitors come through mobile Internet traffic. These are great bits of news since now ” … for certain queries,
listings rank higher in smartphone search than they do in desktop search simply because the site that previously ranked higher is not mobile friendly,”
according to the Search Engine Land website.

This algorithm also ranks mobile-friendly websites higher specifically when users are browsing from mobile devices. Desktop browsers and mobile-device browsers no longer get the same search results. This fact may scare some since Search Engine Land also shares that ” … there are officially more
smartphone than desktop searches in the United States.”

However, you’ll still rank well if your personal website is mobile-friendly too — and while Facebook does get more traffic than most small-business
websites, that doesn’t mean that all of Facebook’s traffic will automatically discover your business page. You’ll still need to develop your Facebook
business page with regular marketing efforts.