4 of the Webs Hottest Social APIs 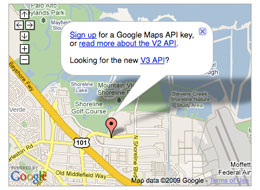 The API (Application Programming Interface) has been an essential component for creating applications that hook into or utilize web apps such as Twitter and Facebook.Â  With it, developers have been able to create some amazing mashups and tools.Â Â  Some of the most helpful and oft-used applications on the web wouldn’t be possible without APIs.

Google Maps is one of the hottest APIs on the web.Â  The ProgrammableWeb API Directory tracks over 1800 mashups for Google Maps, which is more than three and a half times as many as the next most popular API. Google Maps perhaps did more to popularize the concept of web application mashups in the middle part of this decade than any other API.

1. Google’s Official Documentation for the Maps API is probably the best place to start. The site offers a developer’s guide, code samples and demos, case studies, and even a sandbox where you can test stuff out while you learn.

2. Earlier this year, Google abandoned its official Google Maps API blog in favor of a new Google Geo Developers Blog. The new blog encompasses all of Google’s mapping APIs, including both Maps and their Earth program. The blog is filled with useful posts about using the API, frequent news updates about changes and developments with the API itself, and links to creative uses by other developers.

3. The Official Google Maps API Group is probably the first place you should check out if you need help with your Maps-based project. The extremely active group hosts hundreds of thousands of discussions and is frequented by both seasoned and rookie developers, as well as Google Maps API core contributors. It is often the first place that upcoming API changes are made, so if your project hinges on the Google Maps API, then you should definitely keep an eye on the official group.

4. Mapki is an unofficial Google Maps API wiki at which Maps developers come together to discuss and document the API. The site has a huge list of developer’s tools and tutorials, as well as code snippets and FAQs.

5. Mike Williams’ Google Maps API Tutorial is an excellent and up-to-date overview of the API. It’s a great getting started point for anyone trying to get into mashup development with Google Maps or integrating maps into an existing project.

Over a million developers have created over 350,000 active applications on the Facebook Platform and Facebook Connect has been adopted by more than 15,000 web sites, according to official stats. That easily makes Facebook’s platform and Connect API among the hottest development platforms on the web today.

1. The Facebook Developers site is one of the most complete and well-made and maintained developer sites on the web. It has a great getting started guide, as well as super active forums, an official blog for developers, and more.

2. If you’re developing anything for the Facebook Platform, then Facebook Developer Tools page is a must-bookmark resource. The tools, including test consoles for the API and FBML, as well as a playground environment for Facebook Connect, are super helpful for anyone working with the app platform or Facebook’s other developer APIs. They also recently released the Facebook Connect Wizard that makes integrating Facebook Connect with your site a snap.

3. Facebook’s Wiki offers a plethora of useful information for developers from guidelines to how-to guides to code examples and more. The site hosts over a thousand articles ensuring that if you need to do it with Facebook’s APIs, there’s a good bet you’ll find the information you need to know to learn how to do it somewhere in the wiki.

4. Though it hasn’t been updated in just over a year, the unofficial Facebook Developer online magazine is still an amazing resource for Facebook developers. It has an incredible archive of useful articles, tutorials, guides, and case studies that are still available for viewing.

5. It may just be a clever marketing tactic to get people to sign up for its hosting services, but Joyent’s popular Facebook Applications Developer Program, which offers free hosting for app developers for one year, is nonetheless a great resource. Especially for developers just getting into Facebook, Joyent’s program offers a no-risk way to test the waters.

Anyone who reads this blog is well-aware of just how fast Twitter is growing. According to Compete, Twitter has grown over 650% this year, and it’s popular with developers too; Twitter application directory oneforty tracks over 1,800 Twitter-based or connected tools and applications.

1. The place to start, of course, is the Official API Wiki, which Twitter has packed with documentation, guides, tutorials, known issues, and FAQs for dealing with the Twitter API and OAuth.

3. Twitter also has a blog, on which the company posts updates about their developer tools, as well as links to content that is helpful for developers, and spotlights of exceptional API uses. Also be sure to keep an eye on the service’s status blog to keep track of downtime issues and scheduled maintenance.

4. The Twitter Development Talk group/mailing list, which is hosted by Google Groups, is one of the best places to go to for help when you’re stuck with a Twitter API development problem. The site has had over 20,000 messages posted to it and is frequented by the API team. Twitter also operates a group for API announcements, which is a must-follow for developers craving the latest Twitter API news.

5. A search for Twitter on GitHub will return a ton of useful resources for developers, including over 13,000 code snippets and over 1,300 repositories, including many of the most popular Twitter libraries and wrappers. You can also find some of the open source technologies that actually power Twitter on GitHub.

Flickr just recently passed 4 billion photos, so it’s no wonder that developers are excited to use it. There are hundreds, if not thousands, of mashups that rely on the Flickr API to add a little bit of visual appeal.

1. code.flickr is the home of Flickr’s official developer blog, and their official forum community. There are thousands of discussions in the Flickr API pool, as well as developers sharing screen shots of their creations, and the site also hosts the official SVN and Trac pages for the Flickr API, as well.

2. Yahoo!’s impressive Developer Network hosts a helpful Flickr section with a basic overview of the API, and links to the API key application form and information about rate limits and commercial usage. However, if you want meatier documentation, you’ll need to check out Flickr’s Official Flickr API documentation page, which offers a ton of information about using the API and links to third-party API kits for languages including ActionScript, Java, .NET, Objective-C, PHP, Python, and Ruby, among others.

3. If you’re still stumped, a good place to turn for an answer would be the YWS-Flickr Group on Yahoo! Groups. The active discussion list has over 3,000 Flickr developers that regularly share tips and tricks and help each other out.

5. GitHub has a collection of over 200 Flickr code repositories including libraries and other helpful tools for developers. Ruby, JavaScript, Python, and PHP are the most popular languages among Flickr developers on the code sharing site.