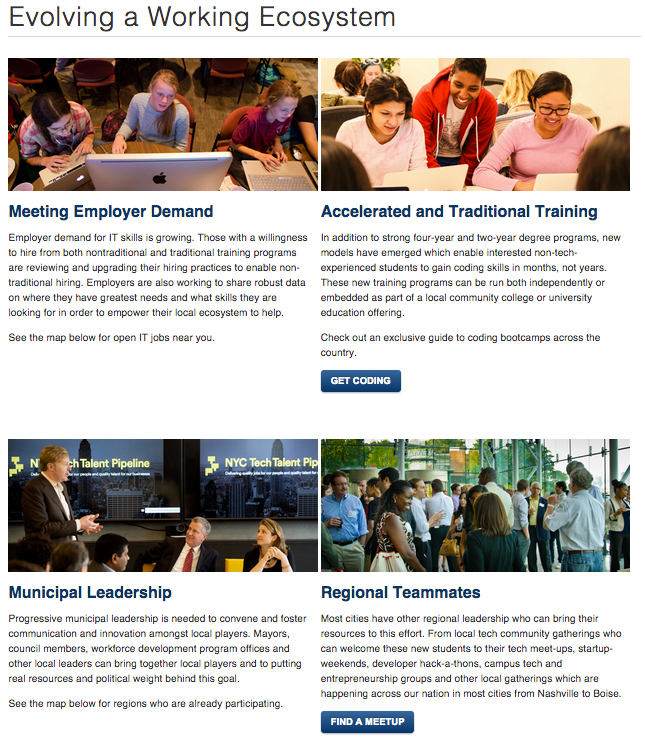 Middle class range jobs for lower income and young people through multi-sector initiatives in community colleges and universities, non degree tech job training and placement is being offered. The program is called TechHire and is described to be funded by $100 Million Dollars in grants.

A fact sheet says the economy has been basically anemic and the numbers of people who are no longer working are at a staggering level of 93 million out of the work force and 49 million people on food stamps. The claim is there are 5 million jobs that are open in the tech industry and that all different pockets of the job sectors are in need of filling. Many of these jobs are in the computer programming area. Therefore, The President has launched the TechHire program to boldly promote a call to action to empower Americans with new skills. These are the skills to be obtained through universities, online courses and community colleges that will offer non degree programs where students will be training in a crash courses. ‘Code boot camp’ courses will certify in 12 weeks time and then place qualified candidates in these jobs for hire in less than 6 months time.

The 85 Billion Dollar stimulus did not create many jobs and the second one did not either. The unemployment rate does not include those who have stopped looking for work. There is a renewed effort to claim that the middle class economics is fueling an economic comeback. However, the recent jobs numbers in September of 2015 were sadly disappointing with the national economy limping along at under 3.0 GDP which is much slower than anytime in 60 years for the United States Economy. Women have been especially hit hard as the only jobs they have been able to get on average are administrative assistants, secretaries and food service jobs. Women have been left out. Well trained women with advanced degrees have had a difficult time being hired over their male counter parts on average in leadership roles such as CEOs, CIOs, CTOs, COOs and the management level with jobs in the six figure range.

With the lackluster performance of current economic policies with respect to job creation, the economy is feeling much like a permanent malaise much like the Great Depression except the bread and soup lines are being replaced by chronic EBT card users and people on disability. The President said that in the past five years some 12 million jobs have been added to the economy. This may be so, however they have predominantly been temporary jobs and low paying part time jobs. Income levels have dropped on average per household by $5000 per year. In fact many Americans lost their full time jobs in 2014 when the Affordable Care Act went into effect. Businesses had to cut their employee’s hours back from full time to part time along with losing their previous health care insurance so they would then sign up for health care on the exchanges. Employers could not afford to pay for their healthcare under the ACA and so they cut their hours to stay in business.

The agenda of TechHire is another effort to create moderate income for the struggling youth in America in a job sector that has all but receded with many jobs being given to immigrants with high tech training who will accept lower pay, such as highly skilled Asian immigrants with computer training. However, TechHire will attempt to educate students seeking to compete in the IT industry that has fewer jobs than it did a decade ago because of the movement of these jobs overseas for lower tax rates in foreign countries.

Here are some key facts about the initiative:

TechHire is working in progressive communities in 20 regions of the United States that will recruit this newly trained workforce. They are planning to offer salaries in the range of $50,000 to $90,0000 full time jobs annually. The $100 Million in new Federal investments will be available for the training. This is an H-1B grant competition by the Department of Labor for setting up innovative training programs that graduate and employ previously low skilled individuals in these tech jobs.

What is curious about this plan is what happened to the $85 Billion Dollars of shovel ready jobs from the stimulus one and two? Those efforts failed to create new jobs and spur a real economic recovery. Will only $100 million do any better? Yet, this grant competition is meant to shore up and upgrade the the strategic educational programs being launched with an accelerated learning employment-outcome and certification of registered apprentices.