How Facebook’s Internet.org is Changing The Future of The Web 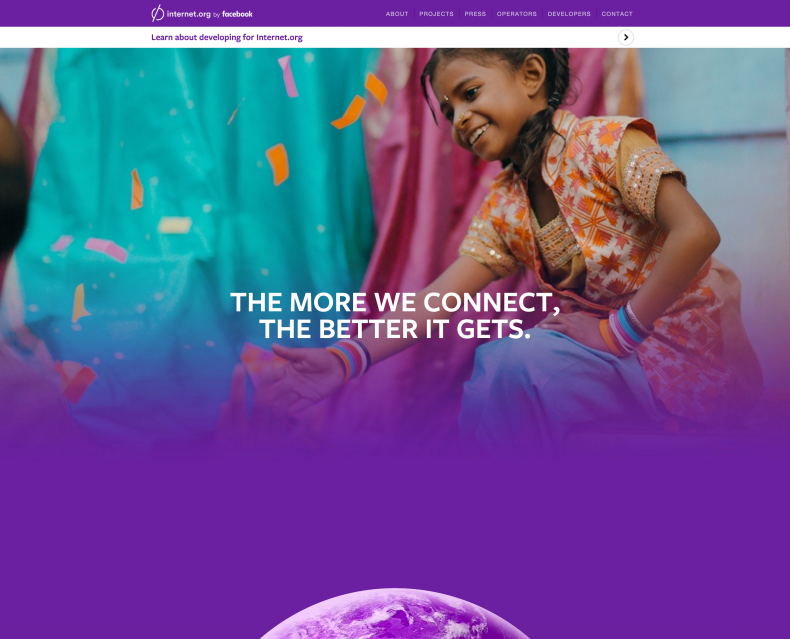 For most of the developed world, access to the Internet is such an integral part of daily life that it is largely taken for granted. Every second of the day, people search, stream, chat, Tweet, post status updates, upload, download and find everything from long-term employment to long-term relationships right from the comfort of their own homes. The Internet is so ingrained in the developed world that someone who does not have a smart phone is considered an odd duck, and a person who doesn’t have Internet access is regarded with shock and mistrust. However, elsewhere in the world, this “abnormality” is commonplace.

An estimated two thirds of Earth’s population does not have access to the Internet. This is particularly true in developing nations such as the majority of Africa and Southeast Asia. Internet.org, the brainchild of Facebook CEO and Internet wunderkind Mark Zuckerberg, pledges to bring the Internet to people who cannot afford the technology required to access the Internet through means the developed world takes for granted. However, the idea has touched off a firestorm of controversy regarding Facebook’s motives, intentions and the minutiae of the plan, including who picks up the check for the services.

In a white paper penned by Zuckerberg to explain the basics of Internet.org, he explains that Internet access is a human right. To support this position, he points to the two thirds of the planet that currently does not have Internet access and posits Internet.org as an “on-ramp” to the Internet. He argues that when people are given the chance to see the utility of the Internet and apply it to their daily lives, they will be willing to pay for costlier data packages that allow access to the entire Internet.

Internet.org’s website states that no one should have to decide whether food and medicine or the Internet is a greater priority, and that the task of ensuring total global connectivity is much too large for any one entity to successfully confront. While the site states explicitly and unapologetically that Facebook is the point entity in Internet.org, is also clearly lays out the intended roles of partners and the lay community. The tenets of Internet.org are stated explicitly in charity-speak, framing the initiative as a function of noblesse oblige and a philanthropic endeavor.

Despite the humanitarian pitch of Internet.org’s home page, many pundits are skeptical of the true motivations for Zuckerberg and Facebook. One of the chief criticisms is that included in the “free” access package is Facebook itself, turning the initiative into a high-profile plug for the company. Another criticism advanced by the CEO of VodaFone, a partner in the movement, that “Internet.org is philanthropy with [other people’s] money,” a reference to the huge infrastructure, equipment and bandwidth outlays Facebook expects their partners to make in the near future, gratis, in the hopes of realizing payouts 10, 20 or 30 years down the line. This is because Facebook does not have the financial or infrastructure clout to take on the material requirements of the initiative on its own, requiring the company to resort to crowdfunding and crowdsourcing on a scale unheard-of in the modern business world.

What’s In It For Investors and Partners?

Zuckerberg believes that as more people obtain access limited free Internet offerings Internet-org provides, investors will reap the financial and word-of-mouth charity benefits in terms of more people using higher-end services to avail themselves of more of the immediate benefits of the Internet. As the bulk of Facebook’s revenues derive from advertising, it makes sense that Zuckerberg would attempt to monetize the Internet.org model as much as possible, just as he did with Facebook originally. Critics say this points to a lack of altruism and that the real motivation is a long-term money funnel to drive more users and hence profits in developing nations to Facebook and its partners in Internet.org. However, the requisite investment in building a national Internet infrastructure from the ground up mean that profitability would not be seen for decades, if at all.

What’s In It for Users?

Because the initial offerings through Internet.org would be relatively sparse, limited mainly to Facebook, local news and health information websites and similar landing points, Zuckerberg has made it clear that Internet.org is not offering the whole Internet for free. He points to high bandwidth costs and other factors as a driving force in this decision. However, with more connected users, he believes people will naturally be interested in what else they can access in their native tongues, demonstrating the power of the Internet definitively and for the ultimate betterment of all people everywhere.

As of the last known update, Internet.org has launched in 6 countries and is slated for debut in another 54 before the end of 2015. Although some of Internet.org’s partners are publicly gun-shy about the project, people everywhere are watching Internet.org to see if Zuckerberg’s vision truly is motivated by philanthropy or a hunger for ever-greater profits. How Internet.org benefits its target audience will prove the most telling metric for its success or failure.