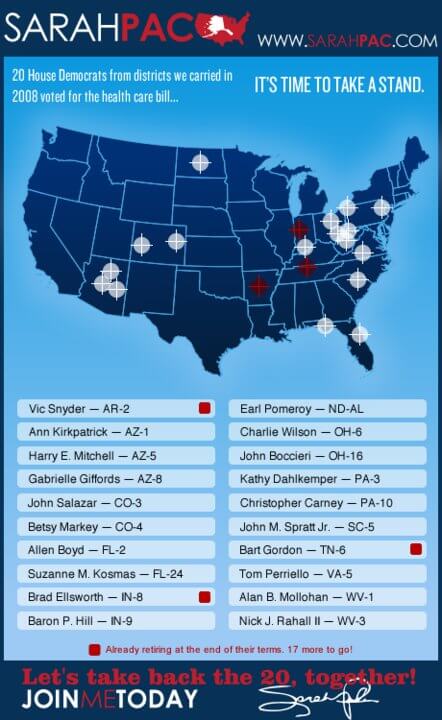 Social Media is very sensitive and can be equated to a magnifying glass on everything good or bad about you. If you followed the 2008 presidential race, you know how critical Social Media was of the presidential candidates as well as Palin. In light of the tragic events in Arizona, the public scrutiny on Sarah Palin through Social Media have hit an all time high.

I’ll dissect the Social Media backlash against Palin as it’s one of the best long term examples of what not to do and how an Internet Marketing firm can handle the damage. This post isn’t an issue of political affiliation but rather to understand the monumental effects of Social Media – for better or for worse.

One of the most powerful things about the Internet is the archival of data. Every Tweet, every email, every status update and every comment is most likely saved in one form or another. Even content you published on a blog but took down can be resurrected to promote a political agenda or hold someone accountable. The key thing is realizing what context your content will be placed in the future.

The above image, published months ago by Sarah Palin came under heavy scrutiny following the shooting in Tuscon, Arizona that left Representative Gabrielle Giffords in the hospital and 6 others dead. While Palin couldn’t have foreseen someone shooting Giffords (which was loosely implied on the image), the backlash is phenomenal as the image and her comments are now put in to a new context following the attack. Afters new broke of the shooting, the site that hosted the image, Take Back The 20 was taken down immediately.

The site’s removal didn’t stop journalists, bloggers and other from digging up cached copies of the images and references on Palin’s Twitter profile and Facebook page encouraging voters to “reload.”

While the two combined don’t directly encourage violence, the media has placed some blame on Palin for promoting a negative message.

Social Media amplifies what you say. It’s the first channel many consumers turn to when they voice their problems with large companies or even other people. The events that unfolded in Arizona had many people express their anger for Palin’s political rhetoirc. Some felt Palin was responsible for promoting violence against a US Representative and should be held accountable. Others argued that blaming Palin for the shooting was irresponsible and borderline hypocritical.

Both points of view were given a voice through Social Media. A very loud one at that.

The debate came to Palin’s Facebook page where moderators quickly deleted any negative comments against her. Does Sarah Palin have the right to delete negative comments on her Facebook Page? Yes – it’s an advantage afforded to us when using Social Media but can be equated to a double edged sword. Deleting a comment if it’s spam or promoting hate speech is the right thing to do but you hit a grey area when it comes to a debate. Even though Facebook’s Terms Of Use allows Palin to moderate the conversation on her Facebook page, the side effect is more backlash.

The comment scrubbing that took place on Palin’s Facebook page is comparable to the Streisand effect. The effect, as applied to the comment moderation going on is best summed up by John Gilmore: “The Net interprets censorship as damage and routes around it.”

What can this teach us about Social Media and how to deal with a backlash of this magnitude?

But what do you when you’re facing a crisis? The best thing to do is own up to it. Social Media forces everyone to be held accountable for their actions. While you may not get enough kudos to cancel out the negative press against you, your image online will fare a lot better. Social Media retains a human element of the conversation and with instant access to information, it’s very easy to prove a point and have the facts back it up. Shying away from that shows people you’re trying to avoid debate and responsibility for your actions. You can’t censor the conversation.

What could Palin have done differently from a Social Media standpoint? She could have left the comments on her Facebook page and invited everyone to an open discussion addressing each individual concern in a blog post. Palin could have taken responsibility and acknowledged the potential message being sent by her Tweets, Facebook status updates and the now offline site that hosted the crosshairs image.

Palin’s actions to scrub the net of any trace she left has only generated a greater outcry against her actions. While the ratio of positive to negative press would still vary dramatically, her image wouldn’t suffer as badly. Instead, we’ll most likely see her most recent actions referenced, even more so when she runs for a political office.

Like what you see? Contact DigitalEYE Media to jump start your business in the new year to increase conversion and create a passionate community following your brand. View our Portfolio and see the amazing work we’ve done for clients such as Pacific Merchants, sellers of Acacia Hardwood Trays & Bowls and premium Mason Cash pudding basins.