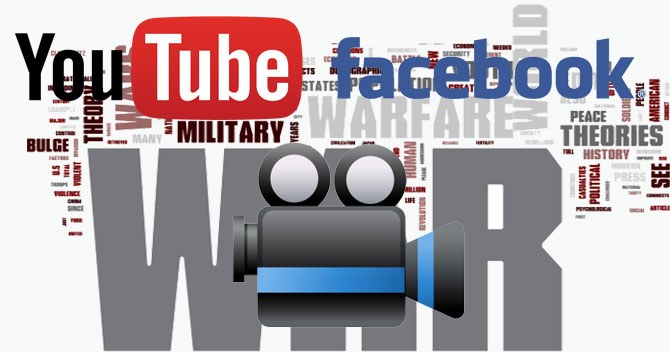 One company is the master of the online video content universe. The other company changed forever the way people interact with each other. One company does just one thing, but does it very well. The other company does a lot of things well and still isn’t satisfied it has reached its potential. Now, online video content giant YouTube is bracing for a little competition from social media giant Facebook in YouTube’s area of expertise.

Facebook Video
At its recent F8 conference, Facebook confirmed the company is stepping up its efforts to provide embedded video content to its users. The announcement also made it clear the company is prepared to take on YouTube in YouTube’s own backyard. While this isn’t the first time the social networking giant stepped into another medium, it does mark the first time Facebook has thrown down the gauntlet at the feet of another media giant that may have a decided advantage.

Who Will Win the Video War?
While it might be awhile before the smoke clears and a victor can be determined, there are several areas of the online video content business that can evaluated to determine whether or not one of these two companies might have some type of advantage.

Intent of the Users
When a user goes to YouTube, there is no denying their reason for doing so. They are there to view video content or post a video. YouTube allows the individual to determine what they want to watch from a selection of millions of videos. This kind of freedom of access has been a hallmark of the company’s platform. Facebook is taking a different approach. Using a technology algorithm, the company is choosing the video content being offered to users. The success of this choice is going to be determined by the algorithm’s ability to correctly predict the content the end users want to see, which is no easy task considering the kind of diversity found in Facebook’s membership.

Advantage: It’s a push. Some users enjoy the freedom while others like the idea of having immediate access to trending videos without having to search for it.

Distribution of Content – The strength of YouTube’s distribution network comes from years of building relationships with major content suppliers like Chromecast, Amazon, Netflix and Apple. The company has also built an extensive distribution network with mobile apps that can reach almost any mobile device on the planet. This is a new realm for Facebook. Content suppliers and end users are going to need to change the way they view Facebook. As a company that is seen primarily as a social networking site, the company is going to have to invest heavily is promoting the idea they offer video content.

Offering Premium Content – YouTube has the advantage of having established relationships with so many of the major media companies like Hollywood distribution companies and television networks. While Facebook is a bit lacking is this area, the company’s name recognition and reputation is likely to give it access to the content it needs in short order.

Viewership – This area is difficult to evaluate. The users currently visit each of these sites for different reasons. YouTube already has a huge lead in video viewership because that’s what the company provides as its primary service. The real issue is this. What happens to viewership when the public gets used to the idea of Facebook as a viable video content option? It’s hard to predict, but Facebook’s membership carries a lot of weight.

Final Analysis
For now, a slight edge goes to YouTube. That said, it would be a mistake to underestimate Facebook’s ability to adapt to new technology. The reality is the competition between these two media giants is going to be intense. In the end, the winner is going to be determined by Facebook’s ability to successfully deliver video content as part of the overall social media experience.